Product Line:  VERDE
It has been noticed that attempting to run Windows Updates on Windows Server 2016/2019 Data Center version fails.
Following are "fixes" for this issue.

Regarding updates running in the Deployed Server: the customer must disable Updates once he/she is ready to deploy the image.  Do not allow updates to run when the server image is being used.

As well, using Servers in VERDE as opposed to desktops is at your own risk.  We support VDI (Virtual Desktop Infrastructure).

After some research regarding an Error that I get when I try to perform Windows Updates on Windows Server 2016 / 2019 Data Center.

What I found is that for some reason, the default Server configuration ‘Disables’ the Windows Update Service.  When I set the ‘Windows Updates’ Service to Automatic and Start it, I am able to perform the Windows Updates.  This is not a problem with Windows Server 2016 / 2019 Standard Edition.  (see screens below).  So this is NOT an issue with Verde.

NOTE:   Windows Updates should be performed in the Gold image, not to the deployed Windows Server, unless the Deployment Mode (in Desktop Policy) is set to STATIC instead of Dynamic.  Otherwise, the Updates won’t be persistent after the Server VM is Shutdown/Started. 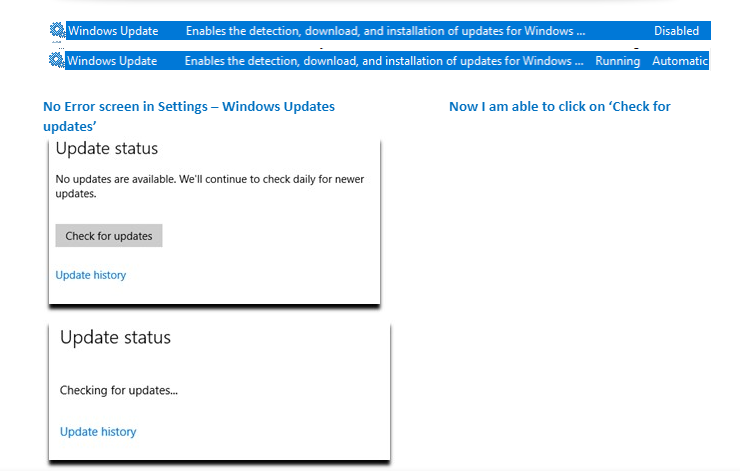