Note: RX-HDX device must be rebooted for the above changes to take effect.

Besides enabling the CUPS daemon the network printer must be added to device configuration. This must be accomplished under ‘Drives/Printers > Printers’. After adding a new printer, the following printer-specific NoTouch settings must be configured:

The functional redirection of local printers (network printers are considered to be local too) is enabled by default. It can be explicitly enabled in NoTouch OS or NoTouch Center under connection’s Citrix Workspace App settings:

The command output will be a list of installed printer drivers with comma-separated driver properties in form of: 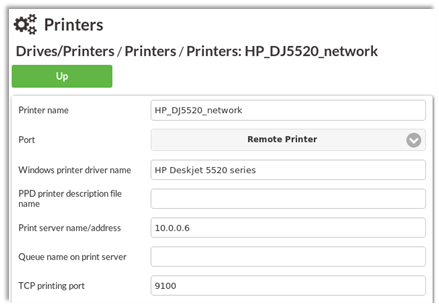 With the above configuration Citrix Workspace App will report to Citrix session the presence of the local ‘HP_DJ5520_network’ printer and request the Citrix server (the VDA machine) to use the ‘HP Deskjet 5520 series’ Windows printer driver for the printer created in the session. The RX-HDX client device will also create a local printer with the name ‘HP_DJ5520_network’ and communicate with it using the JetDirect protocol over the specified IP address and TCP port 9100. This will result with the printer being redirected to the Citrix session: