A Few Additional Words Regarding the Sizing Tool and Capacity Planning

A Few Additional Words Regarding the Sizing Tool and Capacity Planning

Product Line:  VERDE
The Verde Sizing tool doesn’t have any knowledge of Operating Systems.  It relies on you (the Customer) to input up-to (4) Use Cases that define each Workload in terms of:   needed Memory, needed virtual Processing power, needed diskspace for the User Profile and documents.

If you know that the Workloads have previously been Windows 7 and you are now moving to Windows 10, the only thing that you need to do in the Sizing tool is to change the Memory per Session from:  1 Gig or 1.5 Gig with 1 vCPU for a Windows 7 desktop to 2 Gig for Windows 10 for a Task Worker with 2 vCPU. And if the Windows 10 Use Case is a Knowledge Worker or Power User, allow for 4 Gig RAM and 4 vCPU.  These settings have worked well for Windows 10.

NOTE:   Windows 10 has a voracious appetite for CPU Utilization when Windows Updates and One-Drive is allowed to run within a virtual Session.  It is important to ‘Disable’ these functions for deployed desktops and make these configurations in the Gold image.

These increased resources per Session will determine the maximum number of concurrent sessions for a given amount of Server RAM, Processor Cores and Local disk space.

I am including a detailed comparison of resources needed for Windows 10 running a small number of applications.  (see below)

This might help illustrate the live Task Manager results within a Windows 10 session using 1 vCPU and 2 vCPU settings.  The memory that was assigned to this analysis was set to:  2 Gig

You can increase the RAM to 4 Gig for a heavier workload.  I hope this helps.

RESULTS of Testing a Windows 10 Pro VM with 1vCPU assigned in Session Settings vs 2vCPUs.

If you have Workloads that exceed the following application set, you would need to increase the Processor setting to:  4vCPUs

I have launched the following applications in both scenarios:

I also loaded a document in each of the MS Office applications.

To stress the CPU, using a split screen, I was able to type into the Word document and watch the CPU Utilization rise in the Task Manager.

In the Windows 10 Pro VM with 2vCPUs, the CPU Utilization in Task Manager rose to a high of:  34% while typing sentences into Word 2016.

So for a light-duty Task worker running MS Office and launching a Browser, they could be provision with 1vCPU.

For a Use Case with more demands on the Windows  10 Pro VM, it would be advised to assign 2vCPUs. 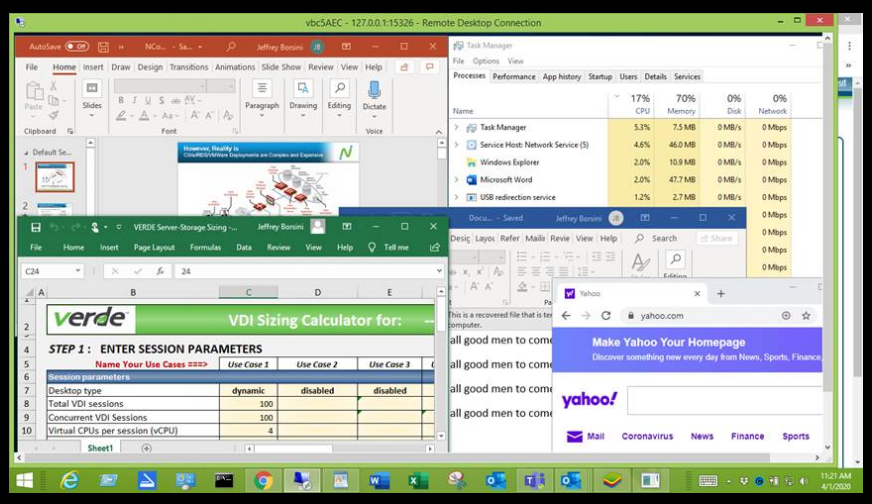 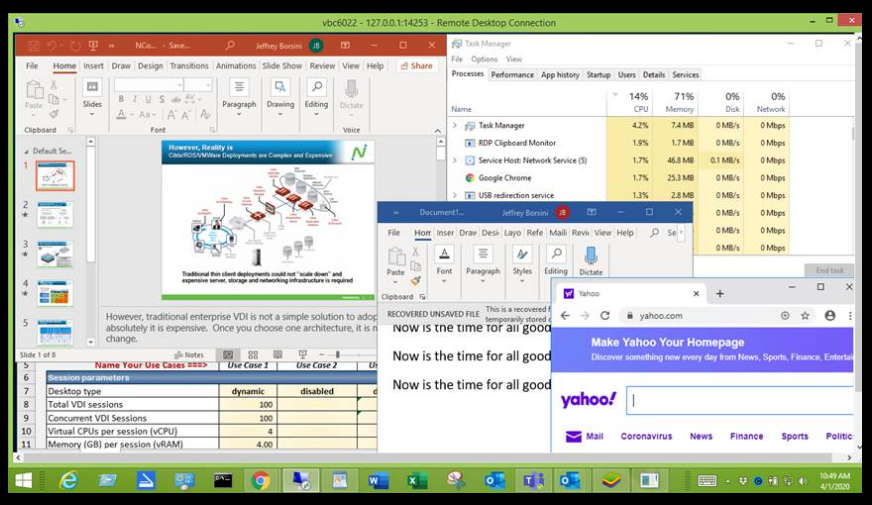